In January 1906, the Norwegian campaigner Helga Gill (1885-1928) appeared on the platform with the Corbett family, with whom she was staying, at a local Liberal celebration of Charles Corbett’s East Grinstead General Election victory. In June 1907, Norwegian women with a certain level of income were enfranchised; Helga Gill then returned to England to work as a NUWSS organiser. This meant travelling the country, to a Worcester by-election campaign in January 1908, to Cambridge, to Littlehampton and Arundel in Sussex, and to Arbroath in Scotland. In 1909, while Lancashire organiser, with former cotton-mill worker (see) Selina Cooper, she took time out for by-elections in Edinburgh and Stratford-on-Avon, then, after a month at Cardiff, organised a by-election campaign in Mid-Derbyshire. In August 1909, she and friends undertook a NUWSS horse-drawn caravan tour to publicise the cause round the villages of Wales. A report by one of her companions quoted a rural convert: ‘If we had Miss Gill here a month, I think everyone in the county would be a Suffragist.’ Time spent in Hertfordshire, Cambridgeshire, Bedfordshire and Buckinghamshire was followed by a return to Derbyshire for the January 1910 General Election; later that year she moved on from Cumberland and Westmorland to Tunbridge Wells. Her next posting was to Oxford, the Midland Federation of NUWSS branches thanking national headquarters ‘for giving us such an efficient organiser’. ‘So many societies claim her help.’ Before embarking on a month’s NUWSS caravan tour through the Midlands in August 1911, Helga took a break at Danehill, singing with Cicely Corbett at a concert at the Horsted Keynes Congregational Hall. Like Cicely, Helga gave her occupation on the 1911 census form as ‘Suffrage Lecturer’. In January 1912, she toured Ireland for the Irishwomen’s Suffrage Federation, returning there with Cicely Corbett after a spell working in Oxfordshire, Buckinghamshire and Berkshire. In late 1912, after a NUWSS caravan tour of the Midlands and North Wales, Helga addressed meetings throughout Kent: at Bromley with Cicely Corbett, at Edenbridge with (see) Margery Corbett Ashby. Back in Oxfordshire in 1913, she frequently spoke in company with former militant Evelina Haverfield. In November 1913, in South Lanark for a by-election, Helga worked with members of the NUWSS Scottish Federation, whose secretary, Dr Elsie Inglis, was to be the founder, at the outbreak of war, of the NUWSS Scottish Women’s Hospitals. In December 1914, Helga was a member of the first Hospital Unit to leave for France, working initially in the clothing department at the hospital set up at Royaumont Abbey. She subsequently became an ambulance driver: one of the medals she was awarded was for driving under fire. After the War, Helga settled with her adopted son, a war orphan, at Woodgate Cottage. As the only woman member of the Danehill branch of the British Legion, she ran the Boys Brigade as well as taking over as secretary of the Danehill WI. When she was fatally injured by a tree falling on her car, her obituary in the Mid Sussex Times began, ‘Danehill mourns’; tributes in the Woman’s Leader were written by Margery Corbett Ashby and Millicent Garrett Fawcett. Contributed by independent researcher and writer, Frances Stenlake. Sources: Mid Sussex Times; Women’s Franchise; Common Cause; The Woman’s Leader; local newspapers from all over the country. 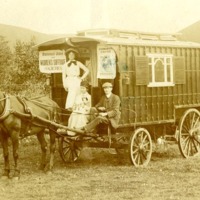 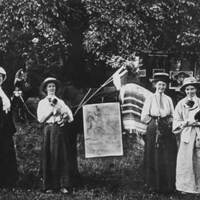 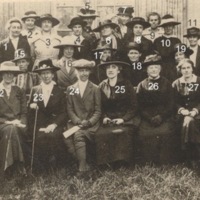