The secretary of the Wolverhampton Women’s Suffrage Society, the local branch of the NUWSS, was a Charlotte Eliza Taylor (nee Butler), born in Rugby in 1859. She had married Frederick David Taylor in Stourbridge in 1882. In 1911, the couple were living at 107 Waterloo Road (now extensively redeveloped). While Charlotte did not follow the suffragette trend of spoiling the census return by being anonymous or refusing to be counted, in the entry for her trade or occupation was written “Housekeeper to above” (i.e. her husband), which had been crossed out, indicating that she was keen to highlight her equal role with her husband. Charlotte appeared in a newspaper report in 1908 (see image) about 'Rowdy Scenes' at a Wolverhampton suffrage meeting held at the Co-operative Hall in Stafford Street. Teresa Billington-Greig, one of the founders of the Women’s Freedom League (WFL) was the speaker and a group of young men at the rear of the room were laughing, jeering and shouting throughout. Mrs Billington-Greig, ignoring the commotion, carried on with her speech regardless, even highlighting the attitude of “green and callow youths who failed to understand the liberties which they inherited, and for which their fathers fought and died”. Following this statement, one of the young men threw a test-tube containing sulphurated hydrogen which hit Charlotte Taylor in the face, filling the air with a pungent sulphuric odour. Charlotte screamed out as 'a crimson stream' ran down the side of her face and she was escorted home. One of the stewards at the event, wrote to the local newspaper the Express & Star to complain about a lack of interference from the police, who did not assist in breaking up the hooligans. Contributed by: Heidi McIntosh, Senior Archivist, Wolverhampton Archives. 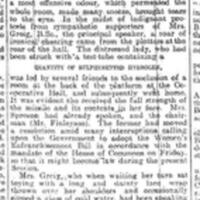 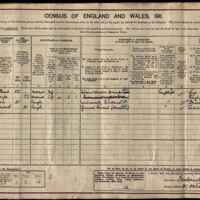